If you start playing the game London Inspector and feel as though something is very familiar, it may be because this game looks an awful lot like it is based on Sherlock Holmes. In fact, this is exactly where Real Time Gaming drew its inspiration for this game and though its 25 paylines and five reels have nothing to do with the days of the inspector who lived at 22b Baker Street, this is still a game that will make you feel as though you are taking part in solving a mystery. The icons help bring that to life too with a magnifying glass, inspector’s badge, a watch, lantern, and the Inspector himself. Though the theme is quite a clever one, the illustrations don’t seem to quite do it justice. But if you’re looking for a game with a theme that’s not quite what you’re used to, this is the one to play at Yebo Casino. 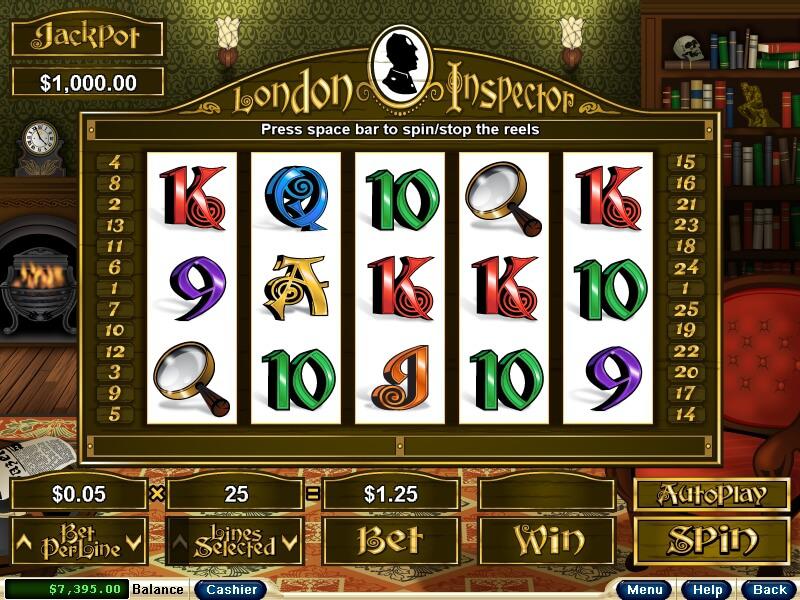 The symbol to keep an eye on is the hat which will pay you out a generous 4 000 coins if you should happen to land five of them. The lantern also has something to offer with a decent 1 250 coins paid out, but it is really the wild you’ll want to keep watch for. The wild, by the way, is the watch and should you find it, it will help you complete any combinations for a win, and it can be stacked. The London inspector is the scatter and though he doesn’t have the same power as the wild, he’s got a few tricks up his sleeve, such as being able to pay our up to 75 times your original wager and giving you up to 15 free spins with prizes being tripled during those spins.

As with so many players, you’re probably a little curious about the game’s progressive jackpot. This one is going to wow you. At the time of writing this review, the jackpot was sitting at a ridiculously high number of over R500 000. If you consider yourself an amateur detective, there won’t be a mystery around you won’t be able to solve if you have that amount of money in your bank account. But, be aware that it’s a random jackpot so unless the odds are in your favour, you won’t be able to claim it.

Don’t have time to play? No problem. That’s what the autoplay feature is for. Simply set the number of spins you want the game to play on your behalf, or the amount you want it to bet, and let the game do the rest. You can sit back and watch, or go off on a mystery hunt of your own, only to return to what could be a nice bank of cash.

All in all, this is a game with real character that will give you hours of investigative fun. While the illustration style does leave a little to be desired, this is still a smart game made for people who like the idea that every spin could produce surprising results.