The Haunted Opera is set and ready for the show, the singers have taken the stage and all that is left is for you to take your seat and start spinning any of the five reels to find the symbols you need to make you a winner. Real Time Gaming developed this 20 payline game that is based on the famed musical, the Phantom of the Opera, and even if you have never had the opportunity to watch this soulful dramatic play, this game will give you the gist of it pretty quickly. The game’s background is created to promote the theme while the symbols, including the young soprano, the rose, the mirror and the Phantom himself, all lend themselves to a pretty dramatic game.

The game allows for some pretty non-dramatic betting options that make it a great one for newer players, but the payouts are comparatively quite impressive. The Phantom’s mask is the wild and finding it on any of the lines to complete a winning combo will multiply your win by two. However, if you use it to make a winning combo during the game’s free spins round, you’ll actually have your win multiplied by six. 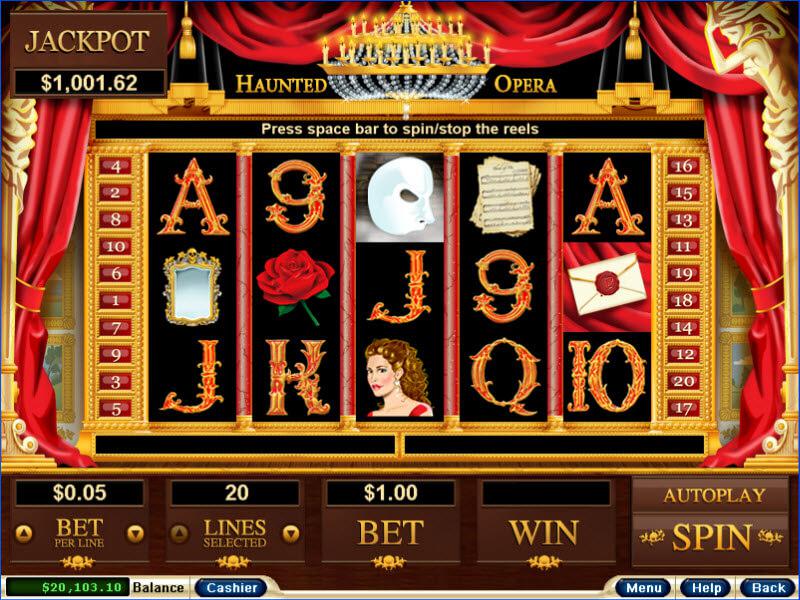 Some of the top fixed payouts you can expect include the 5000 coin jackpot for finding five of the sheet music symbols, which of course gets doubled if the mask has been used to complete that combination. Additionally, you can win 1 000 coins by finding five of the young soprano. The game’s special feature can be unlocked if you manage to find the letter symbol on the first reel and the mask symbol on the fifth reel at the same time. This will give you five spins with a multiplier of three times and should the Phantom appear during those free spins, you’ll get an extra three spins.

The game has a pretty dramatic progressive jackpot, which at last count was sitting at just over R400 000 but because this can be won randomly, you’ll have to have a lot of luck to ensure its you who takes it home. Then again, if you don’t have much time on your hands but the idea of almost half a million rand is really tempting, you could just set the game to autoplay and let it do all of the work on your behalf. All you’ll have to do is set out the parameters of how you want the game to bet for you, either according to the money you are willing to spend or the number of spins, and then let the game do the work while you get things done.

If dramatic art was always a calling for you, or you simply like the idea of a game based on the famous Phantom opera, why not try out this game? Even if you don’t come for the singing or the fantastic costumes, the idea of a massive progressive jackpot simply waiting to be won has to be quite tempting.