Egyptian themes and childhood royalty meet in this 20-line slot game that gives you a fictional view of what the life of King Tut might have been like. Though not much is known about the young ruler of Ancient Egypt, this game takes the idea to a new level with symbols such as the lion, the bird, the snake and of course, the King himself. With five reels, the game has all of the usual features you would expect to see from developers, Real Time Gaming and though it is just one of the many entertaining games you’ll find at Yebo Casino, this is one that you could play for hours simply because it is so simple.

Boy King’s Treasure features decent graphics with a clear blue view of Ancient Egypt in the background and fairly well-illustrated symbols. Though it is not progressive in its graphic or sound style, it does offer progressive jackpots, and that’s good enough for more players. The top fixed payouts are not bad either with a 1 800 coin top jackpot if you find five bracelet symbols and, as the wild, the King Tut symbol could take that total up to 3 600 coins. The lion is the second highest symbol in terms of payouts and will give you a respectable 1 000 coins should you find five. 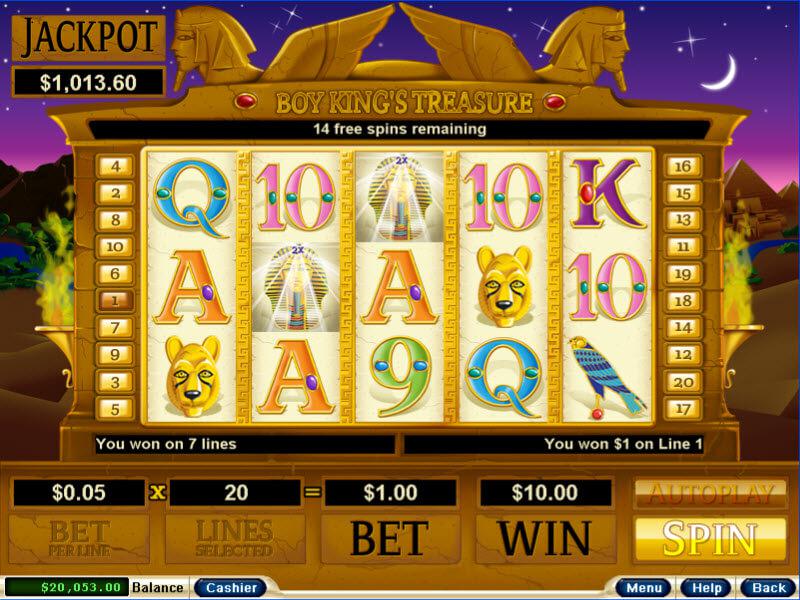 The game’s wild symbol, King Tut, will substitute for any winning combination and because it is a two times multiplier, will double your win. The scatter, which is the snake, is also a great one to keep an eye out for, because if you hit on three of these, you’ll get a five times multiplier. Additionally, hit on four and your win will be multiplier by 25, and even better, five of these will unlock a 125 times multiplier.

The game also features a free spins round if you hit on the scatters and during these free spins, finding the wild symbol will boost your payout by up to 16 times your win. As for the progressive jackpot, this is a random one that you could win at any time, simply for playing. There is no need to concern yourself with how much you have bet or how many of the correct symbols you see on the reels, if this progressive is your main goal.

If you want to play but have a few other chores to do to, you can set the game to autoplay with any parameters you deem fit, from the size of the win you are hoping to get to the number of spins the game is allowed to engage in before it comes to a stop.

Overall, Boy King’s Treasure is a pleasant game to play and though it doesn’t have the razzle dazzle of so many of RTG’s modern games, it is intuitive and easy to play. You won’t have to put too much thought behind how this game works, but after your session, you could come out with a lot of cash.