« Yebo Joke of the week- The Pro Gambler

Charlize and Trevor give back to the community

Charlize Theron and Trevor Noah are arguably South Africa’s Biggest Stars. The two proudly South African entertainers were back home in Cape Town. Not for charity but for human profit. This is what the director Salesian Life Choice expressed to participants at the question and answer session. Other participants of the Q&A session where the two stars and teenagers at the Oakland High School in Landsdowne. 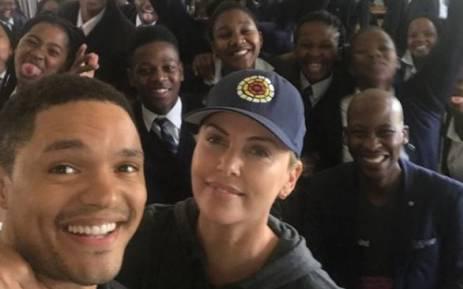 The organisation known as Salesian Life Choices is a for Human Profit enterprise that is based in Cape Town. Their tagline says it all about them. “We invest in youth to make choices that can change themselves, their communities and the world. This is not our tagline… this is our promise.”

They reach up to 9,000 youths in the Cape Flats every year. The programs that they offer encourage the youths to live healthy in every sense of the word. Socially the youth are encouraged to help their families at home. Economically, the organisation “empowers young entrepreneurs to create jobs”.

Salesian Life Choices is promoting excellence through leadership and leaving lasting impressions on the people they impact. An experience that Trevor and Charlize both wish they could have had when they were kids.

Charlize praised her South African upbringing saying it helped her make it in Hollywood. The actress said South Africans are tough people and that was her advantage. And Trevor opened up to the teenagers telling them that he is terrified every time he is on the stage. His confidence is in the work he puts in to prepare. A solid message to youngsters by any account.

The two stars also visited a mobile clinic in Langa. This is another initiative that is targeted at helping the youth steer through life. The clinic provides youth friendly HIV counselling and testing. It is part of the health4life program. Charlize strongly believes that AIDS can be ended and the solution is in the leaders of tomorrow.

The full story is on https://www.sagoodnews.co.za/charlene-trevor-team/