The 2018 FIFA world cup tourney is looming. National teams are preparing hard for the tournament. Here are a few of the Wolrd Cup Matches that were played over the weekend.

Germany woes continue as they had a fifth match without a win. This is a first for the team since 1987-88. But even if you have that losing streak, you do not despair, tomorrow is another day.
Manuel Never, the goalie was included in the team sheet after suffering a 9-month long injury. However, the goalkeeper could not prevent the world champions from being defeated 2-1. 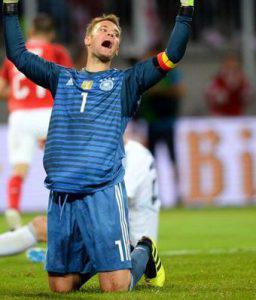 Arsenal maestro Mesut Ozil opened the scoring after an awful blunder by Austrian goalkeeper Joerg Sienbenhandl. The keeper gifted the ball to the striker and he scored to give Germany the edge.
Manuel Never’s nightmares started when David Alaba’s corner found Martin Hinteregger who placed the ball at the back of the net. This put the two teams on level terms in the 53 rd minute.
Austria’s forward line kept on bombarding the German defence in search of a winner. Marko Aunatorvic’s effort on target was superbly saved by Never but Alessandra Schoepf was in a good possession to pounce on the rebound.

Meanwhile, Brazil eased past Croatia with a 2-0 victory. Neymar JR was back into the starting eleven after a long-term injury. Neymar’s sublime strike put the Selecao in the driving seat. It was Liverpool gunmen Roberto Firmino who sealed the victory for Brazil in the later stages of the game.
Elsewhere, a star-studded Belgium side was held to a goalless draw by Portugal. Portugal was without Cristiano Ronaldo after he was given an extended break after a Uefa Champions League final against Liverpool. And Nigeria promised to be a “better team” at the World Cup after a poor performance that saw them lose to England 2-1.