« Health Benefits of a Lily Flower

During the Survivor show, Tom was dubbed one of the most annoying members on the scenes. Despite being called annoying, Mr Swartz defied the odds by claiming the R1-million winning prize. Well, that is way less than the top jackpot prizes winnable at Yebo Casino.

He (Tom Swartz) went on a tough final with his counterpart Jeanne Michel where he faced a grilling from the jury. The pair battled it out for 39 days in the Islands of Philippines in what was a tough survivor battle  of the fittest.

Although other members of the jury believed that either of the two finalists was not supposed to be where they are. However, Tom lamented that he doesn’t agree with what the jury said, he believed that he earned his victory. 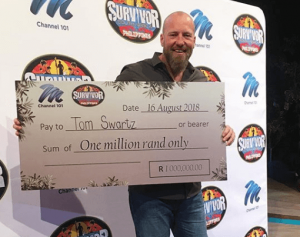 The sixth season of Survivor South Africa was full of brutal twists, surprising turns and heroic shakeup. Despite the aforesaid turn of events, Tom Swartz managed to stand firm and for that, he was declared the winner. Describing his victory Tom Swartz said it was hard for him to hold on to his excitement; “I was over the moon it was surreal,” he said.

Tom Swartz and his family have been staying in Port Elizabeth for five years and started an anti-perlemoen poaching unit. Swartz highlighted that growing up in east London had led him to follow his passion and love for the outdoors.