The Springboks started their Rugby Championship campaign on an impressive note. They subdued the Pumas on Saturday 19 August in front of a cheering home crowd at Port Elizabeth. South Africa’s rugby team sent out a clear message to all other teams. They are not taking any prisoners. Strategy and practice prevailed as they always do. Even when playing real money games at Yebo Casino players who use strategies win more regularly. 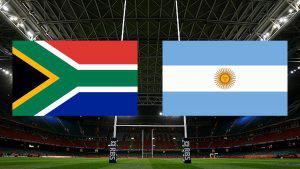 Breakdown of the Game

South Africa 37- Argentina 15 was the final result of the match. A match which was far from a walkover as the score line might suggest. Players from both teams gave their all to the game but the better team just triumphed. Argentina never gave up but kept attacking thus making for an exciting match.

It is a fool’s errand to try and contain the Boks in their own backyard. Therefore credit to the efforts of the Pumas who did a great job of keeping the score line respectable. The South African brought their A-game. This means the power and pace that has made the team a formidable force was at full throttle. Many journalists have just fallen short of saying that the Springboks ran over the Pumas. An analogy which would only make sense to someone who has heard about the great springbok migrations, trekbokke!

As the number one online casino in Mzansi and probably the region we have no problem with acknowledging excellent performances. The entire Bok team put up a commendable display as we have all come to expect. However, special mention goes to Courtnall Skosan and Raymond Rhule who scored their first tries. Other Boks who contributed to the four try victory where Siya Kolisi and Pieter-Steph du Toit. Elton Janties got the South Africans on track in the Championship with the penalties which gave the team an early lead.

Unless if the Pumas got to play casino games at Yebo Casino they only got to celebrate when Martin Landajo and Emiliano Boffelli scored tries. Nicholas Sanchez and Juan Martin also managed to score a penalty and convert respectively for the visitors.