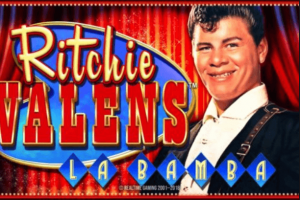 Most South Africans are familiar with the song La Bamba by Ritchie Valens. This is just one of the reasons they will enjoy this 50’s music-themed slot with the same name. Ritchie Valens’ La Bamba is a 2018 real money slot from RealTime Gaming. Jive to the beats as you spin reels on this slot at South Africa’s Top Online Casino, Yebo Casino.

The Sound Of Money

If you want the sound of winning real money to ring on this slot you will have to bet real money. That is just how it goes. Ritchie Valens’ La Bamba is a 6 reel online slot. This means one more reel on which winning symbols can fall.

The game utilizes the very rewarding All Ways Pay system. As a result, there are up to 729 possible winning combinations.

For players to be able to win big in this game they will have to play all the lines. This is more convenient with the wide betting range that accommodates all players. The game settings which include “Max Bet” and “Auto Play” make it easy for players to enjoy the show.

Whether you are a fan of 50’s culture and music or not, Ritchie Valens’ La Bamba will not fail to entertain you. You can clearly tell that the game offers so much more than real money rewards the moment you see the icon in the Yebo Casino lobby. Of course, Yebo Casino compliments the game to give you the best internet gambling experience in South Africa.

The game has a very colourful set-up that is accompanied by a soundtrack that really sets a good vibe for real money gaming fun. Symbols in the game include concert tickets, radio sets, photos, dancing shoes and gramophones.

The Ritchie Valens’ icon is a very rewarding substitute symbol on the slot as previously mentioned. As the wild symbol, Valens will expand to cover all the reels when he appears. This symbol will appear on reels 2, 3, 4, 5 and 6 in the normal game.

Unlike substitute symbols on other real slots, including from RTG, the Ritchie Valens’ La Bamba’s wild symbol replaces for the scatter symbol. The wild symbol only counts once for the scatter per reel. When Valens assists in completing a combination the win is doubled.

The Ritchie Valens’ Free Games feature is one of the fascinating features you will find in any real money slot. This feature keeps getting better as the number of triggering scatters increases.

Four or more scatters will trigger the feature. During the feature, players get up to 20 free spins. The prizes are affected by multipliers of up to X3. This is the basic package which comes with 4 scatters on the reels.

6 scatters activating the bonus feature will add the substitute symbols on reels 1 and 6. During the all free spins, any retrigger will award 20 free games.

Ritchie Valens’ La Bamba offers gamblers a top jackpot prize of 6,000 coins. The fact that wins can be formed regardless of whether the combinations form from right or left of left to right means you will be winning Rands constantly.