“It’s coming home” has been the chant from the England fans at the 2018 World Cup in Russia; unfortunately, it’s no longer coming home.  After the semi-final match on Wednesday evening against Croatia, the Three Lions are going home, losing 2-1 on extra time. 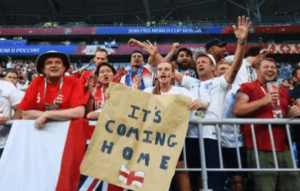 England kicked off on a perfect start after Trippier curled home a delicious free-kick from a close range. His effort put England on the front foot just after five minutes.

Croatia was in doldrums struggling to find their attacking prowess.  The attacking trio of Luka Modric, Ivan Rakitic and Mario Mandzukic failed to make an impact in the early stages of the encounter.

Harry Kane should have doubled the lead for England in the 30th minute but he was denied by goalkeeper Danijel Subasic.

The Three Lions enjoyed most of the possession for the remainder of the first half. Despite that, they failed to utilize their chances.

The Croatian side waited patiently to find their flow in the game going forward in the hour mark, with England showing dis-organisation in their defence. 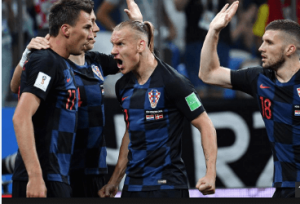 Croatia kept on bombarding the cracking England defence, the high tempo and pressure finally paid off for Croatia in the 68th minute. Ivan Perisic put his team back on level terms after grasping in ahead of Kyle Walker to flick home an equalizer.

The encounter was fluctuating from end to end in the last 10 minutes of regulation time.  Both sides were eager to grab the winner that would send them to the finals against France.  However, neither of the two sides managed to find the winner and the match was forced into extra time. This was the third consecutive time that Croatia had to go to extra time at this World Cup.

England defender John Stones nearly put his team in the driving seat eight minutes into the extra time. His effort, a header on target,  was comfortably cleared off the line by Sime Vrsaljiko

The Croatian side attacked tirelessly to grab a winner overcoming the tough England side. In the 109 minute of the encounter, Mario Mandzukic buried home the winner for Croatia.

This result sent Croatia to their first ever World Cup final. The former will play France on July 15. England will battle for a  third place against Belgium on July 14.