Rose Leslie and Kit Harington who are popularly known as Ygritte and Jon Snow in the series Game of Thrones are officially husband and wife. This was after they tied the knot on June 24 in Scotland. It’s going to be a long wait for next Season’s Finale of the series but the cast has not let us down, instead, they give us another reason to celebrate.

Finally, it’s the arrival of the real King and Queen of the North.  Friends and family shared the happy moment with the couple. Fans got to celebrate from a distance but this did not dampen the parties. 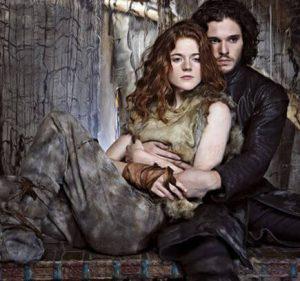 Like any other women about to earn the title of Queen, the actress Rosie got her happy ending by wedding in a castle and having her father walk her down the aisle. Rosie was looking stunningly in her ivory wedding dress, flowery crown and a long veil. Rosie and Kit’s wedding pictures show the couple smiling, waving and having a great time.

The couple announced their engagement in the The Times a London newspaper . This is regarded as a traditional way of announcing an engagement to the public. It might not be for everyone but it is what celebrities do.

According to reports Rosie and Kit were already a couple during the second series of GOT. The shoot took 3 weeks in Iceland and that’s how the “doomed lovers “as they are dubbed in GOT met.

If you are GOT fan get yourself a glass of Champagne or wine has we join Mr and Mrs Harington in celebrating their marriage. Then play an online game at Yebo Casino as we await the new season.