Yebo Casino presents the latest real money online slot from RealTime Gaming to players in South Africa and all surrounding countries. Gemtopia is the name of RTG’s newest internet casino game. As the name implies this game is a real gem. The reels are spinning on a fabulously designed slot to pay out spectacular rewards. Gameplay is very smooth whether you are playing on the latest android or iOS powered devices. The game is a great sounding game that will thrill you with its great animations. 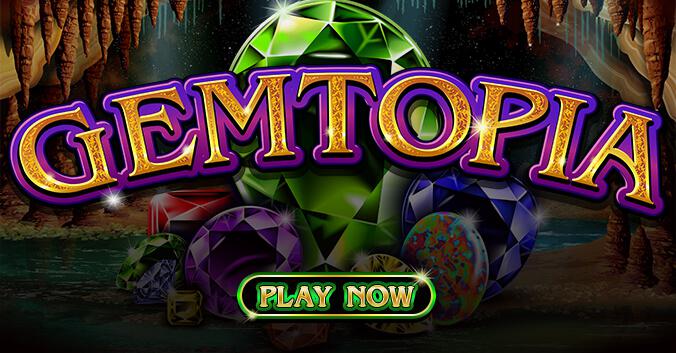 A Treasure Of A Game

The wealth of South Africa comes from the jewels that are under the soil. This game based on these precious stones is already rewarding players on its 15 pay lines. Gemtopia is a 5 reel online slot that is loaded with rewarding features.

Symbols in the games are creatively modelled so they give the game an authentically elegant look. The symbols that appear on the reels are various coloured stones. Although all symbols will give pay outs when they are in combination, there are special symbols that players have to watch out for. Symbols which include the “Wild” substitute symbol and the “Free Games” scatter.

The Gemtopia online slot is a progressive jackpots game. There are two jackpots in the game, a minor jackpot that resets at more than R2,500. The major jackpot in the game resets at more than R10,000. All the jackpot prizes are added to all the other wins. Jackpots are randomly triggered at the end of any game. 1.5 % or less of the Total Return To Player is contributed to the progressive jackpots.

Besides the progressive jackpot, the game also offers a top standing jackpot of 50,000 times the line bet. for players to get this payout the five of a kind combination has to form. All the symbols in the game only pay out when combinations form from left to right. Only the scattered Free Games symbol will pay regardless of how the symbols appear.

Features in the Gemtopia online slot are triggered by the special symbols. The features in the game are the Substitute, the Wild Re-Spin Feature and the Free Games features. Players will discover the rewards offered in the bonuses are some of the best available on any casino game.

The gem with the word “Wild” is the substitute symbol. It appears on reels 2, 3 and 4. When it appears it replaces for all other symbols in combination. The substitute symbol will not replace for the “Free Games” and “Bonus” symbols. When the “Wild” symbol appears it expands to cover all positions on the reel before pays are awarded.

The expanded “Wild” symbol will trigger the Respin Feature. When the feature triggers, a Respin is immediately awarded. The Respins can be retriggered and they are played at the triggering number of lines and bet.

15 Free games are awarded to players after they land scattered “Free Games” symbols on reels 2, 3 and 4. The Bonus symbol appearing in the free games will give players 3 extra free games. Players can win up to 1,000x the bet. The Wild Respins can be activated in the games.

The magic offered in the Gemtopia online slot can be experienced on all kinds of devices. Game play in the slot is optimised to fit on all screens. The slot, therefore, plays the same when you are playing at Yebo’s mobile casino or the desktop casino.

As mentioned above the game is available to play on a variety of platforms. This is just to make sure that even players in Lesotho, Swaziland and Namibia can access the games. The games can be played on the download, instant play, mobile, Kiosk and Mini Game platforms. So regardless of where the members of Yebo Casino are or what they are using to access the internet, they have access to the games.