Game Of The Week-Caesar’s Empire

Each and every week Yebo Casino gives its real money online players a chance to get intimate with one of its top online slots. This week players from South Africa, Lesotho, Namibia and Swaziland get a chance to venture into Caesar’s Empire in search of riches. It is well known that the Roman Empire was a hub of wealth. This game lives up to the theme with its many real money rewards. 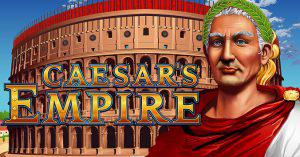 The best online casino for real money players in Mzansi is offering 30 free spins on the Caesar’s Empire online slot. Only players that have deposited real money in the last 15 days qualify to receive the free games. The Game of the Week bonus runs all day, every day of the week. The free games can be easily redeemed from inside the member’s area. Simply log in to your casino account at Yebo Casino and use Code; EMPIRE30 to collect the free spins.

As described above the Caesar’s Empire online slot is based on the Roman Empire and in particular the splendor of Caesar’s wealth. The game is beautifully designed to bring out the best from the theme. Animations in the game along with the audio are as good as we come to expect from RealTime Gaming developed games. This game is a must play for anyone who enjoys the finer online casino games.

The Game of the Week promotion gives you 30 free games on the very rewarding Caesar’s Empire online slot. It is up to you to take up the bonus and use it to win real money. This is a progressive slot so you can be randomly awarded a rich man maker jackpot. The top real money jackpot in the fixed game is 7,500 coins. Special symbols are activating bonus features in the Caesar’s Empire online slot.