Home » Our Blog » Why you should not invest in Bitcoins, Joke of the Week

Why you should not invest in Bitcoins, Joke of the Week

Bitcoins are the hottest investment trend of the moment. And some of the advice on how to invest in them is so hilarious we have to share it with the most awesome internet casino game players.

The decision on how to deal with such opportunities should be arrived at after careful consultation and considerations. As the top online casino in South Africa, Yebo casino comes into contact with all sorts of people. Here is what some of them had to say. 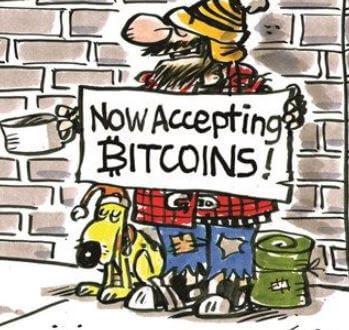 “Chuck Norris mined all the bitcoins, Twice!” That has to take the top spot for the worst reasons not to invest in bitcoins. But as people who lived during the age of Chuck Norris, we know it is bad judgement to underestimate the ability of Chuck Norris in any situation.

The second reason is…well… a lot more tolerable, maybe because it had some serious thought put into it.

“There are no good bitcoin jokes.” is the second reason. Take for example the two below. (And  Yebo casino failed to find any better bitcoin jokes to show you how dire the situation is).

The butcher replies, “No thanks, I won’t bet on that.” The man exclaims, “But I thought you said you are a betting man”.

“Yes, I am, but the steaks are too high”