Yebo casino is the home of many dinosaurs and even Megasuars. Therefore it is definitely good news that there is another carnivorous dinosaur to rule over South Africa with the T-Rex on that awesome real money slot. Ambrokholohali is the name of the latest carnivorous dinosaur to be discovered in South Africa. Besides the fact that the large pre-historic flesh eater was not discovered at Yebo Casino, it is indeed a newsworthy discovery. 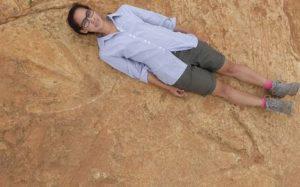 The tracks unearthed by a team of scientists. UCT scientists were the leaders of the group of researchers with members from Manchester, UK and Sao Paulo, Brazil. The discovery was made in the Roma Valley of Lesotho. It was a large footprint that measured more than half a metre in both width and length.

According to a statement from UCT, the three-toed footprint is the first evidence of a large pre-historic predator roaming Southern Africa. It is estimated that the beast lived nearly 200 million years ago.

What makes the find Unique

There have been several pre-historic finds in Southern Africa that point to the existence of dinosaurs on this side of the continent. The tracks which were found at Emeritus Professor David Ambrose’s (hence the name) old site provide evidence of megatheropod dinosaurs that lived in the early Jurassic days.

This new species of dinosaur has tracks that are similar to only one other site which is in Poland, in the Holy Cross Mountains. Although there is a slight difference in the size of the tracks with the tracks being found in Poland being a little bit bigger.

Credit to the Professor for recording the very easy to miss fossils in Lesotho which lead to this outstanding discovery. The carnivorous dinosaur is estimated to have been 9 metres long and 2.7metres tall, at the hip. This would have made it a giant predator in a landscape populated by herbivores, omnivores and small carnivores.