« Cape Town to Brace for Six Days of Rain

Does Championship have anything to do with looks?

After Serena Williams’ bizarre interview with an unnamed Journalist before her French opening match with Maria Sharapova, social media was flooding with disapproval messages reacting to the encounter.
Serena was asked if she was intimidated by Sharapova’s good looks. However, Williams answered the Journalist in a calm and dignified way. But her response was straight up, she has never such thought or neither is she intimidated by anyone on the court.
The Journalist called her “Baby” when she tried to quit the uncomfortable conversation and be with her child instead. As a result, the reporter was deemed a sexist and unprofessional media practitioner. Meanwhile, the episode got us thinking. Does winning a championship have anything to do with looks. 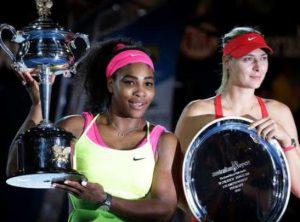 We are all aware that Serena and Maria are “girls on fire” whenever they meet face to face in the court.
36-year-old Serena Williams is an African-American tennis player with 39 Grand Slams title. 8 different times Serena was ranked the WTA world number one. On the 6th occasion, she held the title for a consecutive 186 weeks.
Her Long-term rival 31-year old Russian Maria Sharapova is a 5 time Grand Slam champion who won in 2004 when they clashed with Serena. Maria broke the world record at 18 when she earned the world number one spot.
It will be insane to compare the two who have different appearance. They are all beautiful in their own ways.
The two rivals might be poking each other eyes here and there but that won’t change the fact that Championship has nothing to do with looks.
If you really want to compare them, Serena had more win matches than Maria. It is reported that Williams is worth approximately US$100 million(R1 000 000 000), While Sharapova is on US$ 80 Million(R80 000 000).