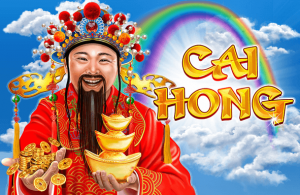 RealTime Gaming has released their 5th oriental themed real money slot in 2018. The Cai Hong real money casino game is now one of the games that members of Yebo Casino can enjoy. And this is one very enjoyable slot. After all, it has a top jackpot of 50,000 coins.

Many gamblers would be excused if they think this game is a sequel to the hugely popular God of Wealth slot. This is because the game features the Chinese God of Wealth. Obviously, the game is different and the animations and graphics that make up the gaming interface are way better.

The Cai Hong real money online slot is as rewarding as they come. Keeping in line with modern trends the game offers gamblers up to 30 pay lines to wager on its five reels. There are three rows of symbols which form the winning combinations.

For players to be eligible for the real money prizes they have to bet real money. Since the game is an internet slot the betting range is quite extensive. Caishen welcomes all budgets. Play the maximum bet to ensure top real money prizes. This is made easy with the Max Bet option which is just one of the cool adjustment settings available to online punters in SA.

Pots of Gold at the End of the Rainbow

This is where the game really comes alive. The clearing sky with the rainbow begins to represent a new awakening. Making the name “Cai Hong” which translates to rainbow makes more sense. The real money slot offers players special symbols that activate bonuses in which more money is available to be won. But that’s not all, in their own combination’s the 8 symbols in the slot prove to be truly lucky.

When the substitute symbol, Caishen, the god of prosperity appears on the reels know that it is pay time. The wild symbol will help other symbols to complete their winning combinations by replacing for the missing icon. When the wild symbol helps to complete a win, the prize for that win doubles. Only the scattered Rainbows are not affected by the feature. This is because they have their own feature.

In the God of Wealth’s own combination, the symbol is very rewarding. Players will get a minimum payout of 10 coins for two symbols on an activated pay line. The prizes progress to the top prize of 10,000 coins for 5 God Of Wealth symbols.

Scattered Rainbows on the Reels

The scattered Rainbow is the bonus feature activating symbol on the Cai Hong slot. But before there are enough scatters on the reels to activate the bonus feature the game rewards players with scatter wins. Only two scatter wins are required for players to get 2X their total bet. The top scatter reward is 500X the total slot bet. Obviously, you need 5 scatters on the screen to get this prize. Although, the scatters do not have to be on a pay line for them to count.

When three or more scattered Rainbows appear on the reels the Bonus feature is activated. During the feature, punters get to play a pick and reveal game to see what they have won. The bonus features offered include free spins and multipliers. Lucky players can win up to 33 free spins and the multiplier goes up to 15X.

The background makes it seem like you are floating towards a rainbow as the reels spin. What else can we say? Yebo Casino remains the best place to enjoy the real fun and the real rewards offered in the Cai Hong real money slot.