RealTime Gaming (RTG) has done it again. This time the slot they have released is based popular Norse mythology. The Asgard real money slot is based on the heavenly realm where the gods stay. There are several characters from this story that has been famous by Marvel comics and films. However, the game appeals to people from all backgrounds. This is because the game is more than just a comic-themed game. Fans of traditional RTG slots like Thunderstruck will definitely love the game. And the rest of the gambling world will love the rewards and bonuses offered. The Asgard slot is available to play at Yebo Casino in the Month of December 2017. 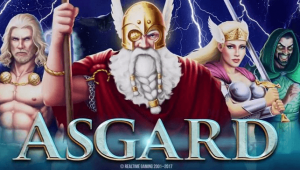 The Asgard real money internet casino game is a 3-row slot. The game has 243 Ways-to-Win that will give players rewards on the games 5 reels. This video slot is easy to play. There are a lot of features that are built into the game to make it more convenient for players. The game has a wide range of adjustable setting. Among the things that can be changed are the speed of the game and the AutoPlay options. As usual, bets can be altered to suit a players bankroll and their gambling strategy.

Players in South Africa can enjoy the game in their home currency, Rands, at Yebo Casino. The bets offered in the game start at a very amount and go on to give a reasonable maximum bet. A minimum bet of R3 is allowed and the maximum bet is R75.

Once the bets have been placed it is time to spin the reels and rake in those real money rewards. The most rewarding symbol in the game is the Wild symbol. In its own combination, the Golden Wild will pay players up to 1,000 coins for 5 of a Kind. The smallest wild payout is 75 coins which are awarded for getting 3 of a Kind.

Bonuses and Features in The Asgard Real Money Slot