Support
Home  »  Blog   »   Senegal Crushes Out of the World Cup

Senegal Crushes Out of the World Cup 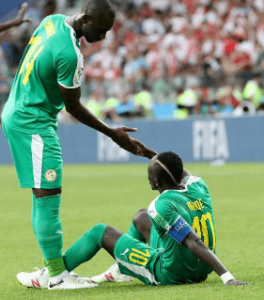 Senegal’s 1-0  narrow defeat against Colombia confirmed that no African team will participate in the 2018 World cup round of 16.  The Lions of Teranga were Africa’s last hope after other African teams were eliminated.

Senegal was given an easier path to sail through to the last 16. They only need one point to advance but they blew the chance. Their fate was decided through the FIFA fair play rule. Senegal acquired a higher number of yellow cards, whilst Japan had the better disciplinary performance.

Senegal’s defeat got them eliminated at the group stage for the first time since 2002.

Senegal was deemed to be the better side during the encounter against Colombia. Like always the VAR didn’t do them any favours. They had a penalty appeal which was overturned during the first half. Senegal had the better strength in attacking but their potency was not good enough to claim the winner.

Colombia kicked off on a very awful start. James Rodriguez was called off in the early stages of the match due to an injury. However, that did not kill the determination and passion of the Colombian side.  Yerry Mina fired Colombia to the last 16 with a powerful header into the back of the net. Colombia topped the group with 6 points and Japan qualified siting second with 4 points.

With all the frustration and the rage that the African football fans are going through. Yebo Casino has some fun online slots games to keep you entertained. Online table games at Yebo Casino are definitely less dissappointing. You will definitely get a hand up on the blackjack tables. Online baccarat will have you scoring more than Mo’ Salah. But do we know, spin the wheels of roulette and find out if you are ready for a big online casino win.